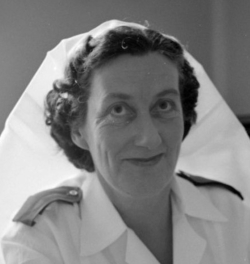 “Leila Mary Elizabeth Jones was born in Whakatane on 31 May 1917.
Her parents were Percy Jones, an estate agent and Mary Josephine (Jo) nee Peers.
Jo, who was originally from Central Hawkes Bay, was previously married to William da Vinci Stuart and they had one son, Richard da Vinci Stuart born 1910 in Taihape.
Following William’s death and Jo’s remarriage Richard assumed the surname Jones.
Percy Jones died in Whakatane in 1918. Jo and her children eventually moved to Central Hawkes Bay.
Leila went to school at Waipawa and Wakarara.
Jo married Hector McNeill in Hastings in 1923. She and Hector took over ownership of the Peers farm “The Retreat” at Wakarara.
Leila continued her schooling at Wakarara School, and Waipawa District High School and she soon assumed the surname McNeill.
Her younger brother, John Roderick Hector (Rod) McNeill was born in Waipawa in 1927.
In 1935 Leila left Wakarara to begin her nursing career at Te Puia Hospital and then continued her training at Hamilton Hospital from 1936.
Following her graduation, she continued nursing at Hamilton Hospital and then at Rotorua Hospital until moving back to Hawkes Bay in the late 1940s.
She worked at the Hastings Hospital for many years and then in the 1960s became the industrial nurse at Wattie’s factory in Hastings.
She lived with her parents in Grays Rd and Pepper St and after their deaths had her own home in Freyberg St.
Leila became quite ill and for a time lived with the family of her brother, Rod in Victoria St.
She died in Hastings Hospital on 16 November 1972. She was buried with her mother in the Hastings Cemetery.”