My Family – A new life in New Zealand.

Some would say I’m European, some would say I’m Pakeha, some would say I’m a Kiwi but I would like to say I’m a New Zealander. I come from a family which started from many origins all brought together by the prospect of a better life in New Zealand. All made the choice to travel for three long months by ship in hazardous, crowded, cramped, conditions to come to the new world – Aotearoa – The land of the long white cloud. The land of opportunity leaving behind the family life they knew anticipating a better life. For some this would be true for others they would discover hardship.

For my great, great, great Grandfather, Albert [Alfred] Willyams, who had arrived in on the West Coast of New Zealand and found a job in the coal mines sadly his hopes and dreams of a wonderful and easy going life were shattered by the Brunner Mine disaster which struck on Thursday, March 26th 1896. An explosion deep in the mine killed all 65 workers, unfortunately Albert was working at the time and was killed leaving behind his wife, Elizabeth and their 6 children, 5 sons and one daughter, Edith. Following this disaster Elizabeth moved her family to Christchurch to find work. This disaster had an ongoing effect for new all immigrants to the West Coast as the lowered economy meant fewer jobs and my Great Great Grandfather, William Robert Leetch [Leech] who had arrived in Hokitika in 1892 from Ballymena also moved to Christchurch to find work. There in Christchurch Edith Willyams and William Leetch met, married and had a daughter and a son, William Albert Leslie (Les) Leech. Les married Nancie Hepworth in 1941 and they settled in Timaru where he became a prominent businessman. They had a daughter and in 1944 a son, Russell Keith Leech, my grandfather. (RK. Leech, personal communication, March 12, 2017).

On the other hand the story of another Great Grandfather, Roderick MacRae MacLean was vastly different. Born in 1906 in the Kyle of Lochalsh, his family had been struck with the great flu epidemic and his mother – Zella and 5 of his 10 siblings had died. Rod was sent to New Zealand in 1921 at the age of 15 to be raised by his Aunt, Catherine. He arrived to the MacKenzie Country where his aunt was established and worked on the high country stations. In 1940 his life in New Zealand was to change when he joined the Army to fight in World War II. Unfortunately he returned from the war wounded. He was rehabilitated and studied to be a land valuer. Rod returned to the MacKenzie Country and in Fairlie he met and married Elaine McCahon a Nurse from an Irish background who was born in Oxford New Zealand. Elaine had grown up with her own share of excitement. In January, 1929, Elaine helped her 69 year old uncle Henry Morris aka New Zealand’s Blondin, to “make good the promise of his advertisement, weather permitting “Blondin will wheel a young lady across the 90ft rope in a wheelbarrow.” Around 500 people came from across Canterbury to watch as Henry wheeled Elaine across the Ashley Gorge on a tightrope 30 ft high and 84 ft wide. (“Rope Walking,” 1929).

Rod and Elaine had two girls one being my Grandmother Zella Catherine MacLean born in Christchurch, 1945. The name Zella has a long history in our family it originates from Zeller Lillingston, a wealthy German lady who lived in Kyle of Lochalsh where my Great Grandfather came from. She was very generous to other people. As a mark of respect families who received money from her would call their daughter Zeller – over time with the Gaelic language the name changed to be spelt Zella. This name continues in our family today with my younger sister being called Zella. (Z.C. Leech, personal communication, March 12, 2017)

So after many people had travelled, lived, worked and survived through disaster and war my Grandparents met and married in Timaru where they still live today. They had my mother Joanne Kristie Blyth in 1974 and in 1995 while studying in Christchurch she met my father Marcus Blyth. In 2004 they married and moved to Marcus’ family farm near Dannevirke where we live today. (J.K. Blyth, personal communication, March 25, 2017).

And so finally some 108 years on from when records show some of my first relatives arrived on the West Coast of New Zealand, I, Jack Wilson Blyth, was born on the 2nd of June 2005 ready to make my own mark in history. Image 1.   The plaque to remember those who died in the Brunner mine disaster.

Image 3.   Mass grave of those killed in the Brunner Mine Disaster

Image 4.   Gravestone showing some of the original Zella’s in my family, killed by the flu epidemic. West Coast New Zealand History. (n.d.) Photograph: Plaque with the name of those who died at Brunner mine. Image 1. Retrieved from [http]://westcoast.recollect.co.nz/nodes/view/1852 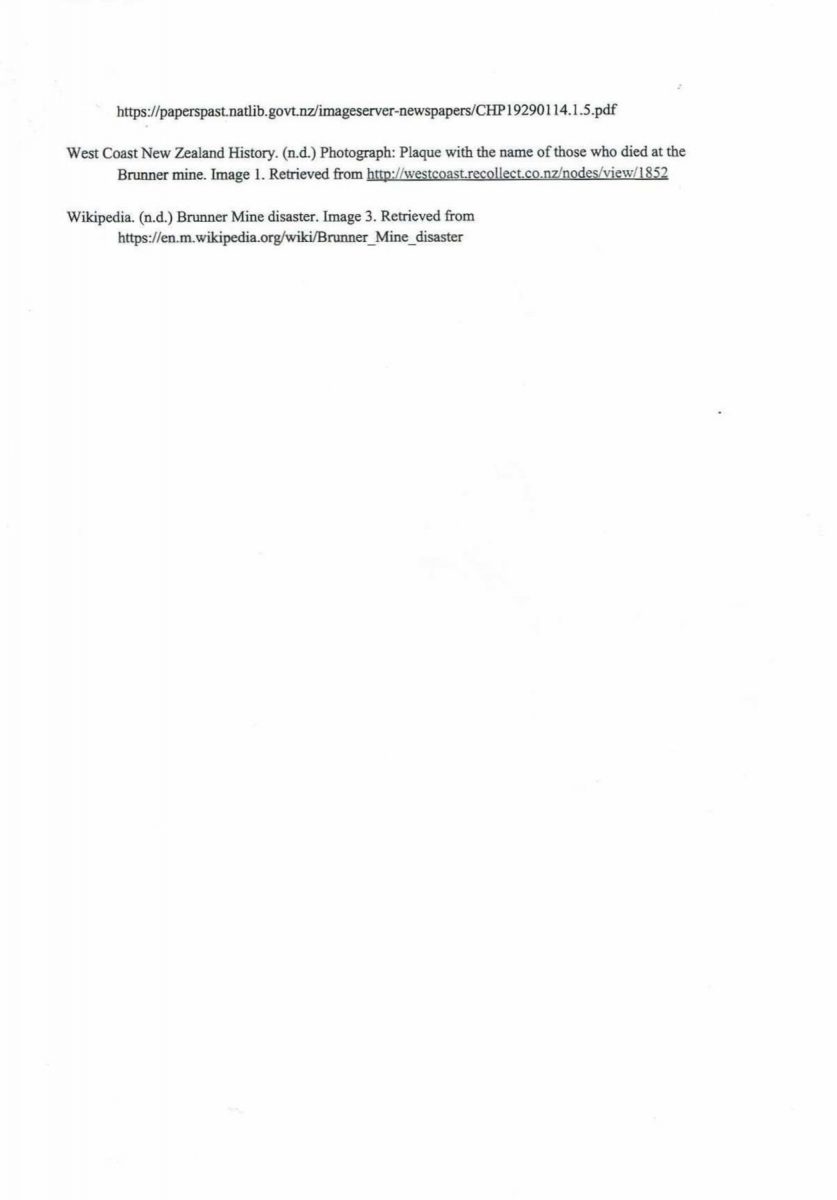