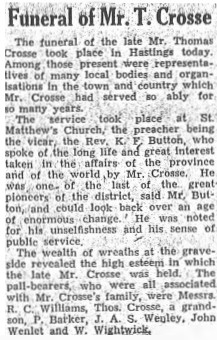 The funeral of the late Mr. Thomas Crosse took place in Hastings today. Among those present were representatives of many local bodies and organisations in the town and country which Mr. Crosse had served so ably for so many years.

The service took place at St. Matthew’s Church, the preacher being the vicar, the Rev. K. F. Button, who spoke of the long life and great interest taken in the affairs of the province and the world by Mr. Crosse.  He was one of the last of the great pioneers of the district, said Mr. Button, and could look back over an age of enormous change. He was noted for his unselfishness and his sense of public service.

The wealth of wreaths at the graveside revealed the high esteem in which the late Mr. Crosse was held. The pall-bearers, who were all associated with Mr. Crosse’s family, were Messrs. R. C. Williams, Thos. Crosse, a grandson, P. Barker, J. A. S. Wenley, John Wenlet [Wenley] and W. Wightwick.