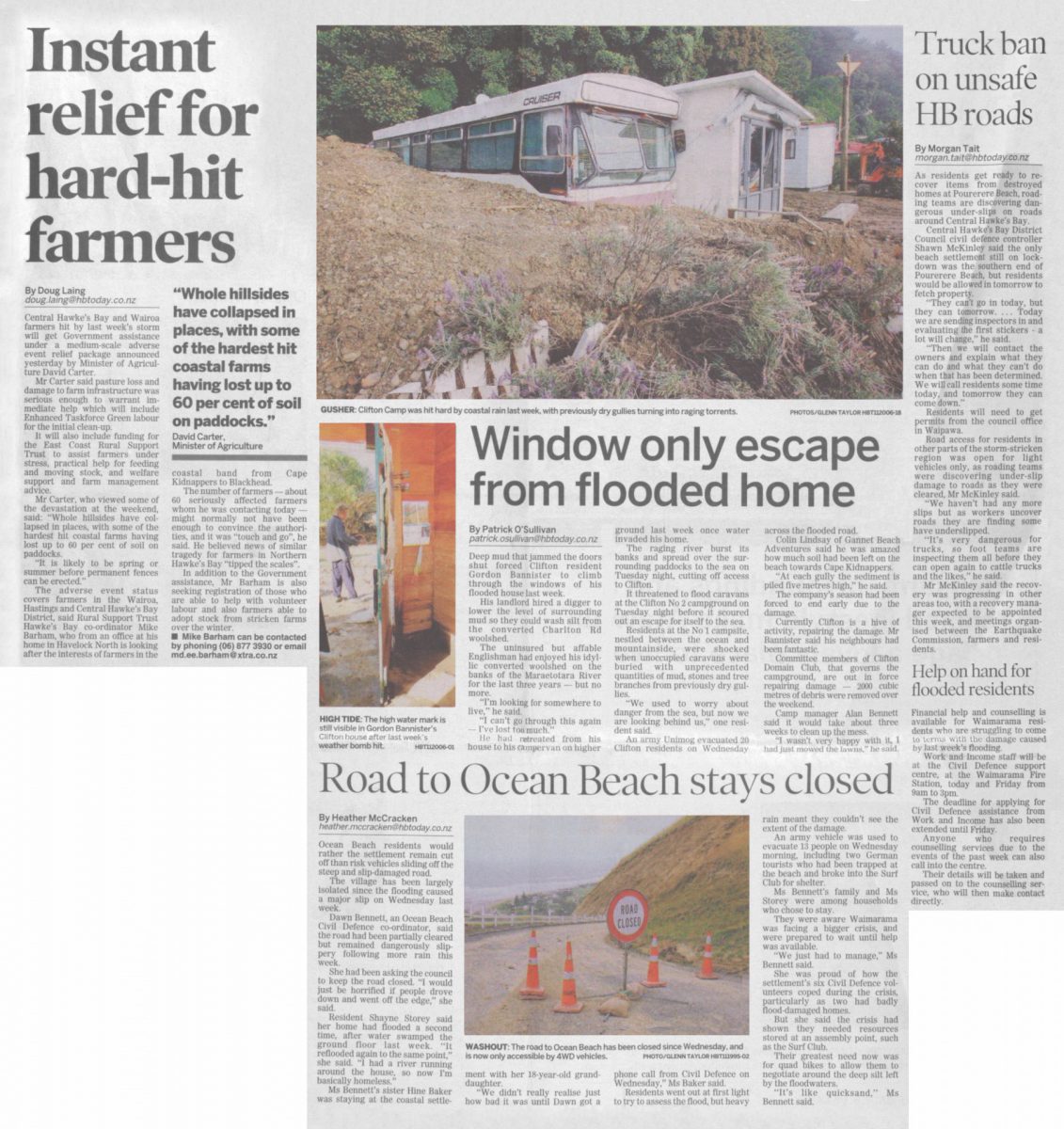 Mr Carter said pasture loss and damage to farm infrastructure was serious enough to warrant immediate help which will include Enhanced Taskforce Green labour for the initial clean-up.

It will also include funding for the East Coast Rural Support Trust to assist farmers under stress, practical help for feeding and moving stock, and welfare support and farm management advice.

Mr Carter, who viewed some of the devastation at the weekend, said: “Whole hillsides have collapsed in places, with some of the hardest hit coastal farms having lost up to 60 per cent of soil on paddocks.

“It is likely to be spring or summer before permanent fences can be erected.”

The adverse event status covers farmers in the Wairoa, Hastings and Central Hawke’s Bay District, said Rural Support Trust Hawke’s Bay co-ordinator Mike Barham, who from an office at his home in Havelock North is looking after the interests of farmers in the coastal band from Cape Kidnappers to Blackhead.

“Whole hillsides have collapsed in places, with some of the hardest hit coastal farms having lost up to 60 per cent of soil on paddocks.” David Carter, Minister of Agriculture

The number of farmers – about 60 seriously affected farmers whom he was contacting today – might normally not have been enough to convince the authorities, and it was “touch and go”, he said. He believed news of similar tragedy for farmers in Northern Hawke’s Bay “tipped the scales”.

In addition to the Government assistance, Mr Barham is also seeking registration of those who are able to help with volunteer labour and also farmers able to adopt stock from stricken farms over the winter.

Window only escape from flooded home

Deep mud that jammed the doors shut forced Clifton resident Gordon Bannister to climb through the windows of his flooded house last week.

His landlord hired a digger to lower the level of surrounding mud so they could wash silt from the converted Charlton Rd woolshed.

The uninsured but affable Englishman had enjoyed his idyllic converted woolshed on the banks of the Maraetotara River for the last three years – but no more.

“I’m looking for somewhere to live,” he said.

He had retreated from his house to his campervan on higher ground last week once water invaded his home.

The raging river burst its banks and spread over the surrounding paddocks to the sea on Tuesday night, cutting off access to Clifton.

It threatened to flood caravans at the Clifton No 2 campground on Tuesday night before it scoured out an escape for itself to the sea.

Residents at the No 1 campsite, nestled between the ocean and mountainside, were shocked when unoccupied caravans were buried with unprecedented quantities of mud, stones and tree branches from previously dry gullies.

“We used to worry about danger from the sea, but now we are looking behind us,” one resident said.

An army Unimog evacuated 20 Clifton residents on Wednesday across the flooded road.

Colin Lindsay of Gannet Beach Adventures said he was amazed how much soil had been left on the beach towards Cape Kidnappers.

“At each gully the sediment is piled five metres high,” he said.

The company’s season had been forced to end early due to the damage.

Currently Clifton is a hive of activity, repairing the damage. Mr Bannister said his neighbours had been fantastic.

Committee members of Clifton Domain Club, that governs the campground, are out in force repairing damage – 2000 cubic metres of debris were removed over the weekend.

Camp manager Alan Bennett said it would take about three weeks to clean up the mess.

I wasn’t very happy with it, I had just mowed the lawns.” he said.

Ocean Beach residents would rather the settlement remain cut off than risk vehicles sliding off the steep and slip-damaged road.

The village has been largely isolated since the flooding caused a major slip on Wednesday last week.

She had been asking the council to keep the road closed. “I would just be horrified if people drove down and went off the edge,” she said.

Resident Shayne Storey said her home had flooded a second time, after water swamped the ground floor last week. “It reflooded [re-flooded] again to the same point,” she said. “I had a river running around the house, so now I’m basically homeless.”

Ms Bennett’s sister Hine Baker was staying at the settlement with her 18-year-old granddaughter.

“We didn’t really realise just how bad it was until Dawn got a phone call from Civil Defence on Wednesday,” Ms Baker said.

Residents went out at first light to try to assess the flood, but heavy rain meant they couldn’t see the extent of the damage.

An army vehicle was used to evacuate 13 people on Wednesday morning, including two German tourists who had been trapped at the beach and broke into the Surf Club for shelter.

Ms Bennett’s family and Ms Storey were among households who chose to stay.

They were aware Waimarama was facing a bigger crisis, and were prepared to wait until help was available.

“We just had to manage,” Ms Bennett said.

She was proud of how the settlement’s six Civil Defence volunteers coped during the crisis, particularly as two had badly flood-damaged homes.

But she said the crisis had shown they needed resources stored at an assembly point, such as the Surf Club.

Their greatest need now was for quad bikes to allow them to negotiate around the deep silt left by the floodwaters.

As residents get ready to recover items from destroyed homes at Pourerere Beach, roading teams are discovering dangerous under-slips on roads around Central Hawke’s Bay.

Central Hawke’s Bay District Council civil defence controller Shawn McKinley said the only beach settlement still on lock down was the southern end of Pourerere Beach, but residents would be allowed in tomorrow to fetch property.

“They can’t go in today, but they can tomorrow. . . Today we are sending inspectors in and evaluating the first stickers – a lot will change,” he said.

“Then we will contact the owners and explain what they can do and what they can’t do when that has been determined. We will call residents some time today, and tomorrow they can come down.”

Residents will need to get permits from the council office in Waipawa.

Road access for residents in other parts of the storm-stricken region was open for light vehicles only, as roading teams were discovering under-slip damage to roads as they were cleared, Mr McKinley said.

“We haven’t had any more slips but as workers uncover roads they are finding some have underslipped.

“It’s very dangerous for trucks, so foot teams are inspecting them all before they can open again to cattle trucks and the likes.” he said.

Mr McKinley said the recovery was progressing in other areas too, with a recovery manager expected to be appointed this week, and meetings organised between the Earthquake Commission, farmers and residents.

Help on hand for flooded residents

Financial help and counselling is available for Waimarama residents who are struggling to come to terms with the damage caused by last week’s flooding.

Work and Income staff will be at the Civil Defence support centre, at the Waimarama Fire Station, today and Friday from 9am to 3pm.

The deadline for applying for Civil Defence assistance from Work and Income has also been extended until Friday.

Anyone who requires counselling services due to the events of the past week can also call into the centre.

Their details will be taken and passed on to the counselling service, who will then make contact directly

WASHOUT: The road to Ocean Beach has been closed since Wednesday, and is now only accessible by 4WD vehicles.
PHOTO/GLENN TAYLOR HBT111995-02