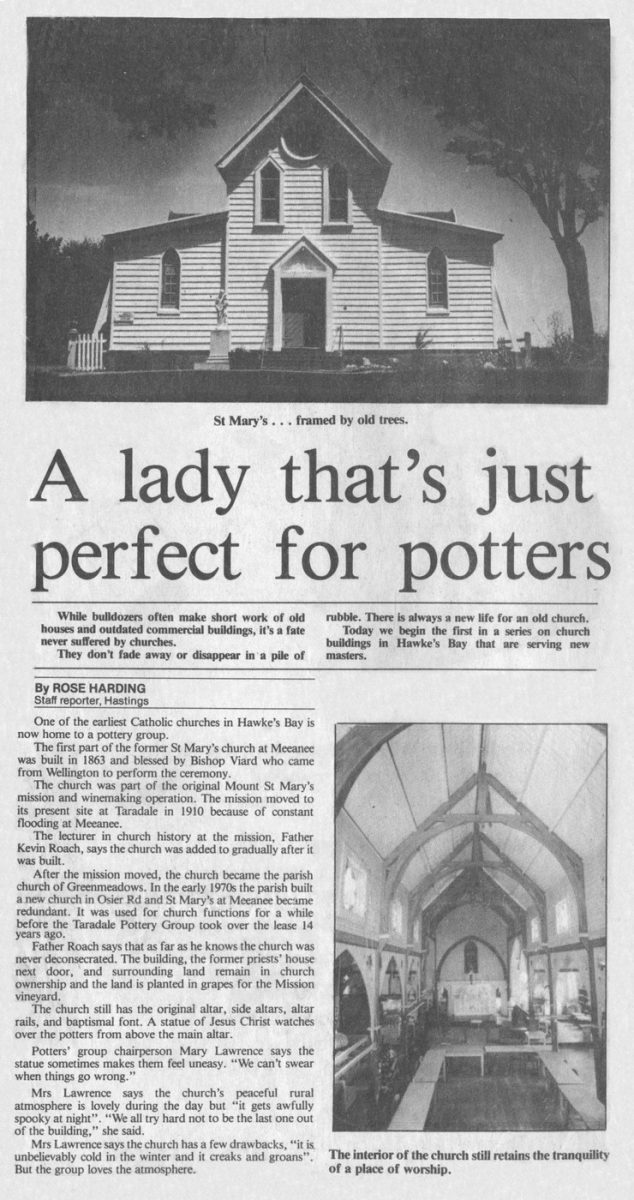 They don’t fade away or disappear in a pile of. rubble. There is always a new life for an old church.

Today we begin the first in a series on church buildings in Hawke’s Bay that are serving new masters.

One of the earliest Catholic churches in Hawke’s Bay is now home to a pottery group.

The first part of the former St Mary’s church at Meeanee was built in 1863 and blessed by Bishop Viard who came from Wellington to perform the ceremony.

The church was part of the original Mount St Mary’s mission and winemaking operation. The mission moved to its present site at Taradale in 1910 because of constant flooding at Meeanee.

The lecturer in church history at the mission, Father Kevin Roach, says the church was added to gradually after it was built.

After the mission moved, the church became the parish church of Greenmeadows. In the early 1970s the parish built a new church in Osier Rd and St Mary’s at Meeanee became redundant. It was used for church functions for a while before the Taradale Pottery Group took over the lease 14 years ago.

Father Roach says that as far as he knows the church was never deconsecrated. The building, the former priests’ house next door, and surrounding land remain in church ownership and the land is planted in grapes for the Mission vineyard.

The church still has the original altar, side altars, altar rails, and baptismal font. A statue of Jesus Christ watches over the potters from above the main altar.

Mrs Lawrence says the church’s peaceful rural atmosphere is lovely during the day but “it gets awfully spooky at night”. ‘‘We all try hard not to be the last one out of the building,” she said.

Mrs Lawrence says the church has a few drawbacks, “‘it is unbelievably cold in the winter and it creaks and groans’’. But the group loves the atmosphere.

The interior of the church still retains the tranquility of a place of worship.