The Hawke’s Bay Branch of the New Zealand Family Planning Association (N.Z.F.P.A.) is using a caravan fitted for medical examinations, and which is lent by the Napier Branch of the National Council of Women, through Year of the Child Telethon.

The Central district Branch of the Cancer Society is also involved, providing money for petrol for the ‘good samaritan’ who tows the caravan and for the fuel costs of the volunteer co-ordinator April Armstrong. The Society also donates posters and pamphlets. The N.Z.F.P.A. is subsidised by the Government but the local branch contributes to the salaries of the lady doctor and nurse, therefore a clinic fee has to be charged.

This caravan clinic is classed as an ordinary F.P.A. clinic session as essentially the same services are provided. These include …

Also there is help with menstruation, adolescent menopausal & sexual problems.

The aim of the scheme is to reach women at their places of work, those in isolated places who have difficulty getting to surgeries and some who may not be registered with a G.P. and encourage them to do so. Many women enjoy the informal atmosphere of the clinic to read the pamphlets etc. and the opportunity to talk about anxieties and ask questions.

The service is the first of its kind in New Zealand and used to operate every second and fourth Wednesday in the month from 10a.m. – 2.30p.m. but now when requested. A minimum of 12 patients attending is required. For further information please ring HBN 68-706.

(The Co-ordinator is now paid for reception duties).

The Mobile Health Clinic was disbanded in 1985. Became too costly. THE MOBILE CLINIC’S PROGRAMME WAS AS FOLLOWS:-

1) Information on all methods of contraception and supplies provided.

5) Help with menstruation, and adolescent, menopausal and sexual problems.

7) Referrals for tubal ligations. (There was one for a vasectomy!)

All details of patients health or other problems were referred back to their GP’s.

This was a pilot scheme the first of its kind in New Zealand.

We had good feed back from freezing works, other places of work & isolated small towns even a small golf club! Poor response from maraes, discussed this with Winnie Major [Wini Mauger] the Maori Health nurse:- a) Antagonism from males i.e. if woman injected with Depoprovera or IUD, had to keep it secret, something to do with their virility! b) What are 2 Poms (Libby & April) worrying about us for?!! Maraes did not like April putting up notices. But no-one informed her of this.

The Health Department maintained the caravan, paid licence & WOF, Post Office allowed it to be parked in its depot area. Jan Price had one key, April Armstrong the other.

At Takapau John Hurst looked after Libby’s Labrador which was on heat, but result? The bitch got pregnant, very odd pups. (Whilst Libby was fitting IUD’s etc!)

April arranged for visit to Te Hauke Marae and promised patients. They all went tomato picking!!

Or the time we went to Takapau township & Libby was in the middle of a pelvic examination and the power went off! No anglepoise lamp! April flew around and found out that there was a meter, so quickly found 50 cents and sanity was restored. No one told her that the “Town Hall” had a meter! (Caravan had to be hooked up to power point wherever.) (a) Embarassment, not wanting men to see them going into mobile clinic.

(c) Back chat from others (ie “what were you going in there for?”)

(d) Chauvinistic husbands, remarks & actions, Eg. Man gets ragged by other men for not producing more children! Many ladies in Depo-provera do not tell their husbands or partners.

(e) The fee is difficult to find in one week by some, suggested that it would be good to contribute some of fee weekly before visit to clinic. Possible if someone on marae was interested enough to arrange this, as ladies tend to spend on children and house items rather than themselves.

(f) Do not like posters put up in their eating places, in maraes. (I did not realise this & no-one enlightened me).

(g) A very few (one!) industrial nurse not sympathetic.

(h) Re-action against 2 Poms! ie Dr Libby Smales & self. Would be better to be run by Maori Drs & nurses & Hacs (receptionists). What are a couple of Poms worrying about us for?.) Hurtful but understandable.

(i) Suggestions:- Drs nurses make appointment with elders to talk to ladies (& men!) on marae before clinic visit. Try & be invited.

(j) Recording service for patients: – To remind them when to have IP [DP] injections & cervical smears (similar to dentist appointments). A two-week programme to encourage Flaxmere women to have cervical smears will begin on Monday.

The exercise is being mounted by the community health division of Health Care Hawke’s Bay and is being run by cervical screening programme co-ordinator Alannah Meyer, assisted by Maori co-ordinator Maraea Nia Nia.

The team will run education sessions, a static display outside the Social Welfare offices next Thursday, display posters and billboards and distribute flyers in the supermarket shopping bags.

During the second week there will be free screening clinics at the Flaxmere Family Centre on Wednesday, Thursday and Friday and a free smear day will be held at the old antenatal clinic at the Memorial Hospital, Hastings, on Saturday, March 26.

Ms Meyer said the Flaxmere project was particularly aimed at Maori women as the incidents rate for cervical cancer among Maori women is more than twice the non Maori rate.

The programme will emphasis the need for regular smears and inform women about their choices of having the smear provided by a general practitioner, practice nurse, or at a family planning * or cervical screening programme clinic.

Attached please find our Cheque for $60.00 being the Society’s quarterly contribution towards running costs of the Mobile Clinic.
We are pleased the service is being appreciated and wish you well with future engagements. 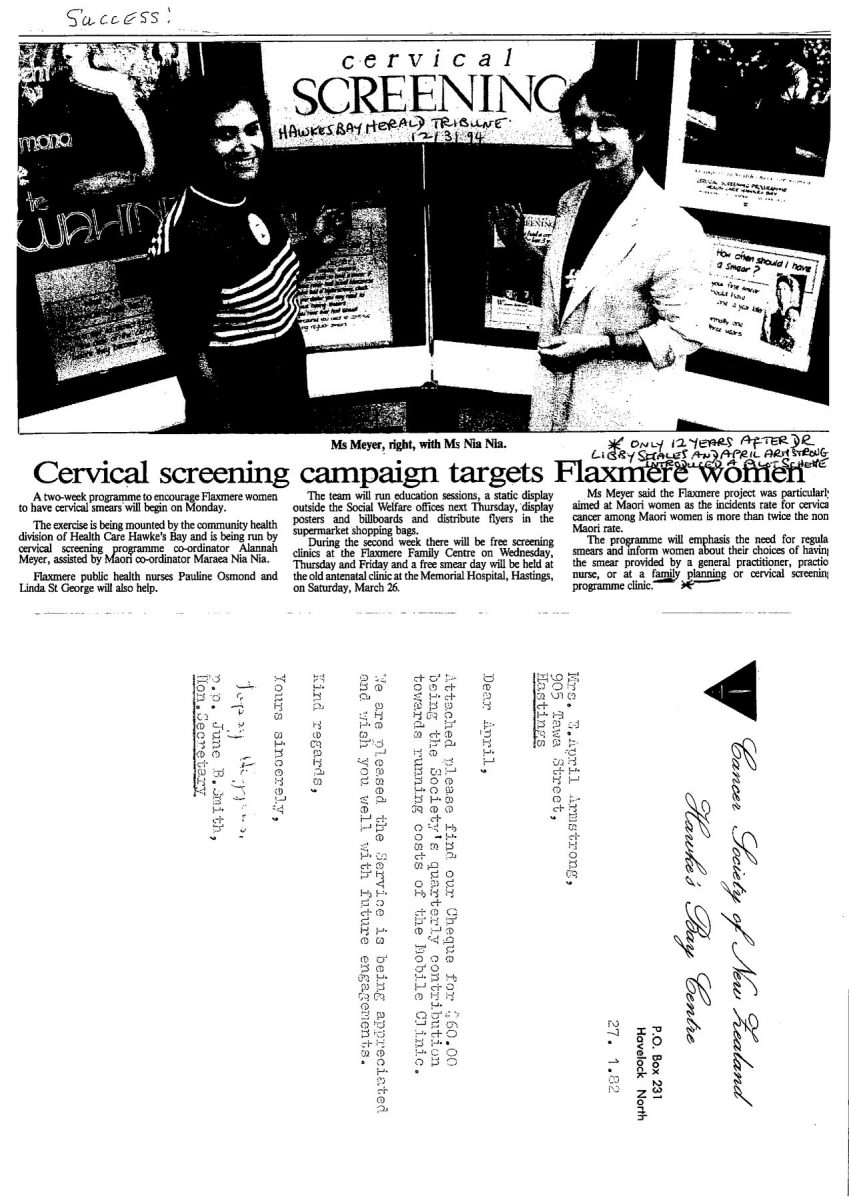 Although Family Planning movements began about 1920 in Britain and the United States, it was

1936 when the SEX HYGIENE AND BIRTH REGULATION SOCIETY was formed in N.Z. with Headquarters in Wellington.

1937 The McMillan Report on the various Aspects of Abortion proved that the majority of women dying as the result of illegal abortion were married women with 4 or more children. The Report recommended the establishment of Birth Control Clinics in public hospitals. The 5 British Birth Control Societies amalgamated under the name of the Family Planning Association.

1939 The Sex Hygiene and Birth Regulation Society changed its name to the N.Z. Family Planning Association and affiliated to the British Assn. The Headquarters moved to Auckland where (except from 1958-60) they have since remained.

1955 Became an associate member of the International Planned Parenthood Federation.

1959 Became full members of the IPFF. Formation of the Medical Advisory Committee. The Society became incorporated.

1961 Accepted by the British Medical Association.

1964 First represented on the South East Asia and Oceania Regional Council of IPFF.

1966 First represented at meeting of the Governing Body of IPPF.

1970 Submissions to the Royal Commission on Social Security.

1971 Formation of National Medical Advisory Council under the Chairmanship of the Post Graduate Professor of Obstetrics and Gynaecology with members from the Medical Schools, University, Health Department and FPA.

1971 The NZ Government made a grant of $25,000 for population control activities, to be distributed in the ratio of 3 : 1 to the United Nations Fund for Population Activities and the IPPF.

1971 The Health department accepted family planning as an important health measure, and staff allowed to refer women to family doctor or clinic for contraceptive advice. 1972 Report on the New Zealand laws as they affect family planning.

1976 The Government agreed to a subsidy formula under which it reimbursed the Association for salaries to doctors, nurses and health assistants (receptionists). The subsidy was $1.8M. This same subsidy till 1981

1975 The Hawke’s Bay branch of the New Zealand Family Planning Assn was formed (see below).

1985 The Association underwent a complete “review” which was completed in September 1986. The Constitution was modified and ratified in October 1987, each Branch becoming a service area in Northern, Central and Southern regions. There are eleven (11) service areas (1993).

Since the late 1970’s there has been increasing emphasis on education culminating in various publications and TV programmes. The subsidy has gradually increased to $4¼M in 1992 year. In June 1993 the NZFPA signed its first Regional Health Authority Contract (RHA).

Since then the NZFPA has progressed to setting up clinics in the Pacific Islands and has sizeable Government monetary help. Education in schools is also an important part of the Association’s programmes.

HISTORY OF THE HAWKE’S BAY BRANCH OF THE NZFPA.

Napier opened in the Crippled Children’s rooms in Raffles Street.

1981 A caravan was utilised as a mobile health clinic, also family planning. Staffed by latter’s doctors, nurses and receptionists. It visited maraes, freezing works and other places of work till 1985. The caravan was donated by the National Council of Women to the people of Hawke’s Bay through donations to the “Year of the Child” Telethon 1978. After 1985 “suitcase” doctors and nurses took over.

1985 Hastings Clinic moved to Flaxmere Family Centre in Swansea Road because previous premises were required by the Probation Service. Clinics operated second and fourth Mondays in Hastings, first and third Mondays in Napier.

1987 A permanent base was found in Duke Street, Hastings, when the Branch bought and renovated an old butcher’s shop (later clothes) in that street (No. 1022) The NZFPA national office now runs the clinic and President and Committee members no longer exist, staff being accountable to the Central Region, main office in Wellington. 1990 – The Napier clinic in Raffles Street closed. There are plans to open another clinic in Napier shortly. One in Herchell [Herschell] Street opened.

Education programmes were started in the late 1970s and are continuing.

In 1987 the National Council of FPA decided to close all the clinics in Hastings and Napier, due to falling off of demand. Possibly due to many General Practitioners being female in the area, and they advising on contraception to patients.

The NZFPA is a member of the South East Asia and Oceania Region of the IPPF. The Federation has 79 member countries (as at July 1972). Only one Association per country is accepted for membership and this Association must be a nationally organised body.

The NZFPA sends two delegates to the Annual Meeting of the SEA & O Region and is at present represented on a number of committees.

The Federation may be counted as clearing house for all international information. It disseminates information from medical research and other educational material and organises conferences, workshops, etc. The Federation is responsible for the distribution of monies donated to those countries with the greatest need.

These are basically New Zealand facts, but obviously the Association has been affected by happenings overseas, e.g. changed attitudes of Protestant churches, relationships with various agencies of U.N, opinions of Royalty, the effects of over-population on developing countries, and the concern for conservation in our own country.

IN 1990 SALE OR DISPOSAL ETC OF CONTRACEPTIVES TO CHILDREN 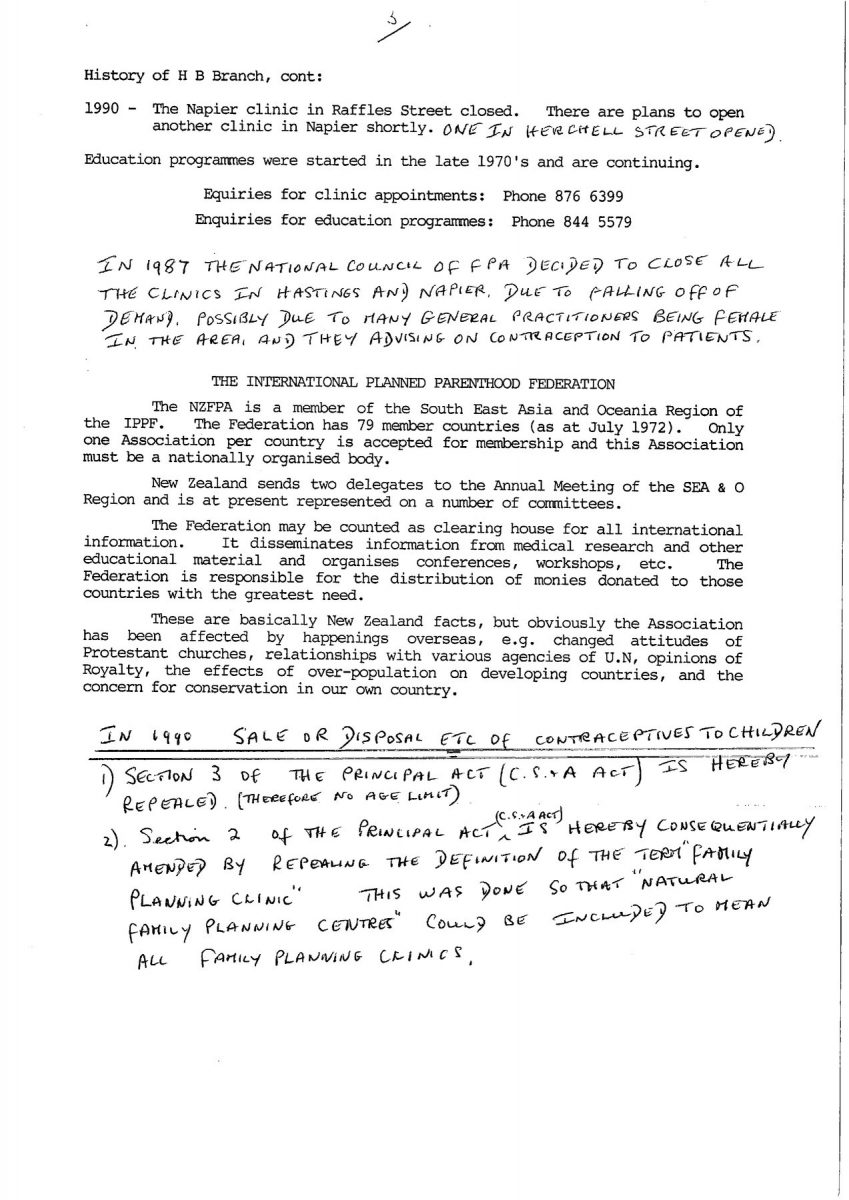